As part of our commitment to excellent due diligence, Harbor takes an active approach to evaluating the market landscape against our expectations and our manager performance results. In the monthly market recap, we share our observations across asset classes and factors.

U.S. stocks continued their advance in June, with the S&P 500 Index extending its rally for five straight months. June saw a strong rebound in growth stocks, which had taken a backseat to value for much of 2021. This marks another switch in the leadership between value and growth this year (Figure 1, 2). 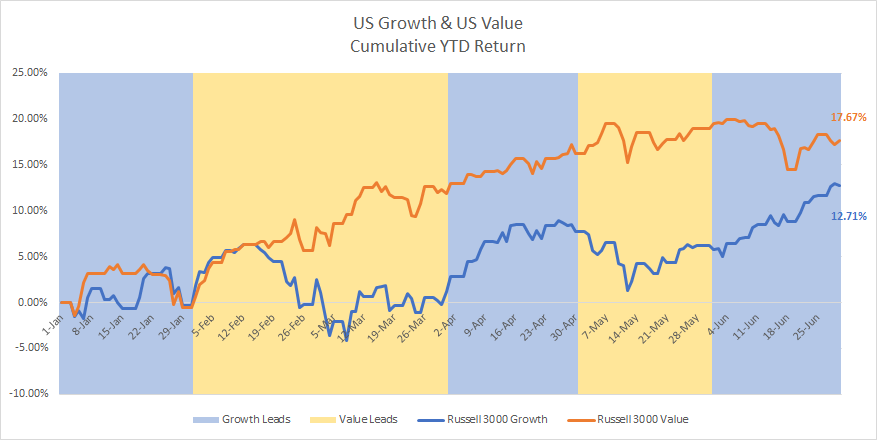 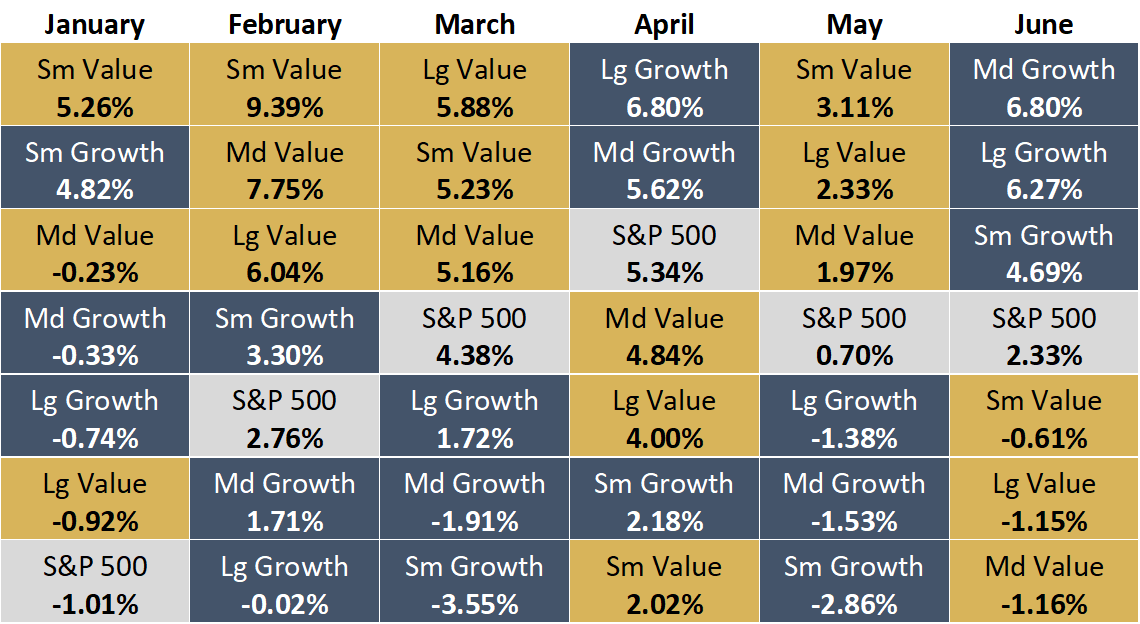 Large caps outperformed small caps in June. Although large caps have outperformed for four straight months, small caps remain ahead of large caps for the YTD and one-year trailing periods. Mid-cap growth was the sweet spot for the month, with a 6.8% return compared to 2.3% for the S&P 500 (Figure 2).

In terms of stock characteristics, investors prized the liquidity factor in June, sending it to the top of the performance charts for the month and reversing four months of negative returns. Strong results in January and June have lifted the liquidity factor above all other factors for the YTD period. Investors also gravitated to profitable companies, as the profitability factor posted positive results in June and also ranks among the top performing factors for 2021. The earnings yield factor was the worst performing sector for the month. Nevertheless, it remains one of the top performing factors for 2021. Momentum posted a negative month in June and remains the worst performing factor YTD.

Developed international stocks lagged U.S. equities in June, and the MSCI EAFE index (EAFE) notched its first monthly loss since January. Although the EAFE posted positive returns from a local currency perspective in June, strength in the U.S. dollar erased those gains for U.S. investors. After weakening for much of the second quarter, the U.S. dollar rallied relative to other developed market currencies in June.

As in the U.S., growth stocks experienced a resurgence in international markets and outperformed value for the month. Value remains ahead of growth for the YTD and one-year periods but continues to trail growth by significant margins over long-term trailing periods. Small caps slightly underperformed large caps in June and YTD, but they remain ahead over the trailing one-year period and all long-term trailing periods.

Only three sectors managed to post positive returns in June: Information Technology, Energy, and Healthcare. Utilities was the worst performing sector, followed closely by Financials. Other notable laggards were Communication Services and Materials.

Japan was the best performer among big benchmark countries. While it posted a modest loss for the month, it lost less than most other large index countries, such as the UK, France, Norway and Germany, which were notable detractors in June. Spain and Italy also generated notable losses for the month. Denmark and Switzerland were among the few countries to post gains in June, thanks in part to concentrated exposure to the outperforming Healthcare sector.

Emerging markets stocks managed to notch modest gains in June, outperforming developed international markets but trailed the U.S. As in other regions, emerging market growth stocks surpassed value stocks in June. While value still holds the lead for the YTD and one-year periods, it remains substantially behind growth for the longer-term trailing periods. Small caps outperformed large caps for the fifth straight month. Small caps now lead large caps over the trailing one- and three-year periods and have now drawn even with large caps over the trailing 10 years.

Real Estate was the worst performing sector in Emerging Markets, followed by Materials, Utilities, and Financials. On the flip side, Industrials, Consumer Discretionary, and Energy posted strong results for the month.

The beta factor was the top returning factor in June and is a performance standout YTD. Growth, momentum and liquidity were also strong factors in June. However, the liquidity factor has been the worst performing factor YTD. Consistent with the underperformance of large caps, the size factor was among the poorest performing factors in June and is a laggard YTD. The earnings yield factor also trailed in June but is a top performer YTD.

After posting negative performance in the first quarter of 2021, many bond market indexes were back in the black in the second quarter. The U.S. Treasury yield curve flattened in June and during the second quarter of 2021 as the yields on 2-year notes rose while those for 10-year notes and 30-year bonds fell. After falling earlier in the quarter, the 5-year climbed in June (Figure 3). 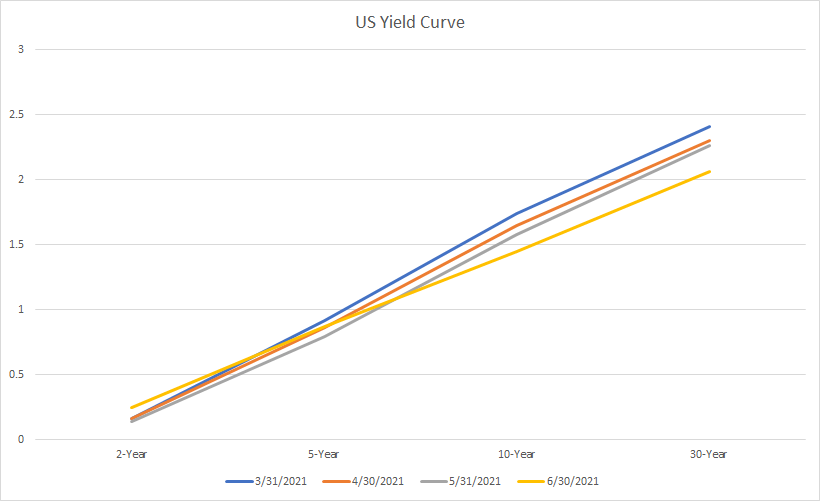 Source: U.S. Department of the Treasury

For the month, the Bloomberg Barclays U.S. Treasury Index gained 0.64%. Investment grade corporate bonds recovered, with the Bloomberg Barclays U.S. Corporate Bond Index rising by 1.63% in June. For the quarter, the index’s spread declined from 90 to 80 basis points, the tightest level since 2005. The gap in spreads between bonds rated BBB and A dropped to 37 basis points, a 10-year low. Net supply has been positive every month in 2021 and there have been fund inflows for each month since April 2020.

Mortgage backed securities gained as well for the three-month period, but lagged other areas of the investment grade market. The Bloomberg Barclays U.S. MBS Index gained 0.33% for the quarter after giving up -0.04% in June. Agency MBS were hit as prepayment speeds picked up, hurting higher coupon bonds. Concerns of higher supply and the removal of Fed support were also headwinds.

The Bloomberg Barclays U.S. Aggregate Bond Index gained 0.70% in June. The index placed behind 72% of Core Bond funds and behind 65% of Core Plus funds for the quarter. Real yields, yields on Treasury Inflation Protected Securities, also broadly fell. The 10-year real yield declined further into negative territory, dropping from -0.63% to -0.87% during the quarter. The Bloomberg Barclays U.S. TIPS Index rose by 0.61% in June.

High yield bonds continued their winning ways, with the ICE BofA U.S. High Yield Index climbing 1.37% in June. The index spread narrowed to 304 as of June 30, the lowest month-end value since before the Great Financial Crisis. June saw CCCs lead the market and was the eighth consecutive month that CCCs outpaced BBs and Bs. Energy was the best performing sector for the month, gaining 2.66%. The ICE BofA U.S. HY Non Distressed Index gained 1.34% for June. Both the High Yield and Non Distressed Indexes outperformed the High Yield Bond category median for the quarter and topped more than 70% of these funds for the month.

Convertibles had a strong month, with the ICE BofA U.S. Convertibles ex Mandatory Index gaining 3.77% 3.30%. The growth leaning area benefitted as growth equities rebounded during the quarter. The index’s June 2021 performance was in the top quartile of monthly returns versus history. The index had a top quintile showing for June relative to the Convertibles mutual fund category.

The information provided in this presentation should not be considered as a recommendation to purchase or sell a particular security. The weightings, holdings, industries, sectors, and countries mentioned may change at any time and may not represent current or future investments.

© [2021] Morningstar, Inc. All rights reserved. The information contained herein: (1) is proprietary to Morningstar and/or its content providers; (2) may not be copied or distributed; and (3) is not warranted to be accurate, complete, or timely. Neither Morningstar nor its content providers are responsible for any damages or losses arising from any use of this information. Past performance is no guarantee of future results.

Past performance is no guarantee of future results.

The information shown relates to the past. Past performance is not a guide to the future. The value of an investment can go down as well as up. Investing involves risks including loss of principal.

The S&P 500 Index is an unmanaged index generally representative of the U.S. market for large capitalization equities. This unmanaged index does not reflect fees and expenses and is not available for direct investment.

The MSCI EAFE Index is an unmanaged index generally representative of major overseas stock markets. This unmanaged index does not reflect fees and expenses and is not available for direct investment.

The Bloomberg Barclays U.S. Aggregate Bond Index is an unmanaged index of investment-grade fixed-rate debt issues with maturities of at least one year. This unmanaged index does not reflect fees and expenses and is not available for direct investment.

The ICE BofA US Non-Distressed High Yield Index is a subset of the ICE BofA US High Yield Index (H0A0) including all securities with an option-adjusted spread less than 1,000 basis points. The ICE BofAML US High Yield Index (H0A0) is an unmanaged index that tracks the performance of below investment grade U.S. Dollar-denominated corporate bonds publicly issued in the U.S. domestic market. All bonds are U.S. Dollar-denominated and rated Split BBB and below. These unmanaged indices do not reflect fees and expenses and are not available for direct investment.

The ICE BofA US Convertible Ex Mandatory Index is broadly representative of the U.S. convertible securities market, consisting of publicly traded issues, denominated in U.S. Dollars, of all credit qualities, and excluding mandatory (equity-linked) convertibles. This unmanaged index does not reflect fees and expenses and is not available for direct investment.